Hello, and how are you today? I wanted to share with you a Necklace Charlie and I picked out from Pictures On Gold. As we was able to Blog for Pictures On Gold for American Family Circle. So before I share my thoughts with you I would like to let you know we recieved a Sports Necklace for free in exchange for this review.

And as soon as I found out I was accepted I sat down to pick out a Necklace. But I was overwhelmed and couldn’t decide on what number to pick out. Or who to get it for. But since I knew Charlie had been wanting a necklace of his own.  I asked Charlie to come and look at the Necklaces on Pictures On Gold. 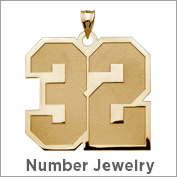 And I asked him if there was a certain number Charlie would like and he asked me how old his sister Suzzane was. As Suzzane  is in Heaven and he hadn’t been able to meet her. So I told him she was 16 when the Lord called her home. And Charlie says he chose it because he is the only child and that is where the one comes in. Just as Suzzane was when she was alive. And it was how old she was when she was killed. And 6 is Charlies favorite number. So he would always have her with him.

And then we went over the different chains and I liked how Pictures On Gold mentions the ages the chains are for. And we chose the 14 inch Sterling Silver Box Chain as this is what Suzzane always wore. And I knew that it would be thicker and not break as easily as a lot of chains would. And I knew it would look nice on Charlie. And it is also his dad’s favortie style of Necklace.

So I am sure once it arrives that David will want one as well but a different number. And the question is what number would he chose and why. And if I had to chose a number I would pick 16 as well as it is the age of Suzzane and the day of the month Charlie was born on. As he was born on December 16th, 2007 so like Charlie I would have both of my children with me. Which would mean the world to me.

Leave a Comment
submit a review Join our blog team

Proud Member of The US Family Guide Network